How shall we deal with outdated answers no longer valid?

This is a sibling to How should we handle obsolete answers? – but with a completely different focus: while the answers there are simply not longer valid for Android versions newer than X – I'm asking about answers which became completely invalid. Examples:

And other things that "invalidate" an answer in a way not easily recoverable by "edit and fix it".

It would be unfair to the answerer to…

Before acting in any way, I'd like to see your opinions – and reach a community consensus. So please point out your thoughts!

N.B. I'm posting this answer to explain what happened with Izzy's first example, in case any non-moderators are confused. It's not meant as an authoritative statement of policy, and I'd love to hear (agreeing or differing) reasoning from the rest of the community.

In the case of the first example you posted, I started editing the question in the way you suggest: removing the rotten link, and adding a note to say why. I was thinking exactly the same way you suggest: that's fairer to the answerer. On Stack Exchange, we tend to dislike deleting people's stuff unless it breaks the site or is actively harmful to the community.

But while I was making the edit, I changed my mind. As I wrote the note saying that the recommendation was no longer useful because the product doesn't exist any more, I felt silly. Why would we continue to carry a recommendation that isn't useful to anyone? All the people the answer might have helped have been helped and have moved on; it's not useful to anyone any more. And because it's no longer useful, there's the risk that future visitors might downvote the answer. Is that what the answerer would want? I don't think it is. I think that they'd come back and delete the answer themselves if it started getting downvotes because it was no longer valid.

In this case, the answer was old enough for the rep gain to survive the deletion of the answer, so the asker lost nothing. I'd hope that that's always the case if the answer has been invalidated by outside change. So in this one case, I decided to delete the answer instead.

I'd rather much see that kind of flexibility - choosing the response that's best for everyone in the particular situation - than a blanket policy. Sure, it opens the possibility of different moderators on different days doing different things - i.e. inconsistency - but I think it's worth it.

I am wondering if we need to have a re-look at the accepted answer which is the de-facto policy. 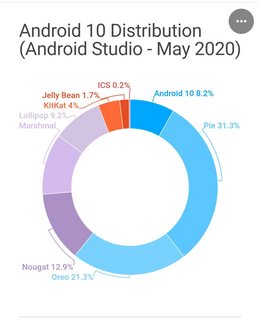 The crux of the reason in accepted answer is

All the people the answer might have helped have been helped and have moved on; it's not useful to anyone any more. And because it's no longer useful, there's the risk that future visitors might downvote the answer

Edit: One more reason not to delete is the reputation loss, which happens unless (Thanks to Andrew for clarification)

reputation earned for posts with a score of 3 or higher, and where the post has been visible on the site for at least 60 days, is retained

This means that users may stand to lose reputation, if they don't meet the above conditions for no fault of theirs! Possible reputation loss was briefly mentioned in question and comments without perhaps taking the specifics into consideration.

It may be best to retain answers IMO, without deletion and as suggested in question, prepend a "quoted emphasized" block with details (a la "this answer is no longer valid because…") with additional link to AppBrain

Not the answer you're looking for? Browse other questions tagged discussion answers .

Welcome!
This site is for discussion about Android Enthusiasts Stack Exchange. You must have an account there to participate.
Help

12
How should we handle obsolete answers?
4
Should app dependent answers with dead links be replaced with AppBrain's links?

3
Why did someone pull the device tag from this question?
4
Do we need/want a general "how do I SIM-unlock my phone" type question?
12
How should we handle obsolete answers?
17
Half line answers -- what would be the best course of action(s) to deal with them?
6
What shall we do with "how to bypass FRP" questions?
1
How are we allowed to have answers that will destroy all devices?
5
Should "lock screen with ads" questions be marked as a duplicate to a single one?
5
How are Flagged Questions/Answers Checked
4
Should app dependent answers with dead links be replaced with AppBrain's links?
1
My post was labeled as not being focused and was closed. What do I need to fix the question?