Today I saw this banner on StackOverflow 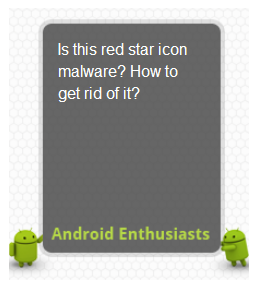 I had to make a huge mental effort just to get that the gray portal that holds the question text is in fact an Android device. The reason is it has proportions of an iPad-like tab - - very close to a square - but most Android devices are smartphones and smartphones have slightly different proportions - less square. Also the gray portal completely lacks Android-specific hardware buttons that make Android devices distinguishable from say mobile Windows devices (the latter have different buttons).

IMO the banner needs improvements. My suggestions would be the following (I myself lack drawing capabilities):

It's not supposed to be a tablet. It's just a notice panel, like the one used on this site's header.

Not the answer you're looking for? Browse other questions tagged feature-request status-bydesign site-promotion design .

29
Can we black-list the Android-tag?
9
Why don't we have a dedicated Android App?
4
Android-StackExchange Swag?
7
Site-wide CSS updates ruin Android SE badge tags