Why are questions rarely being answered, voted and even viewed on this site? (main site)

I was looking at the home page: 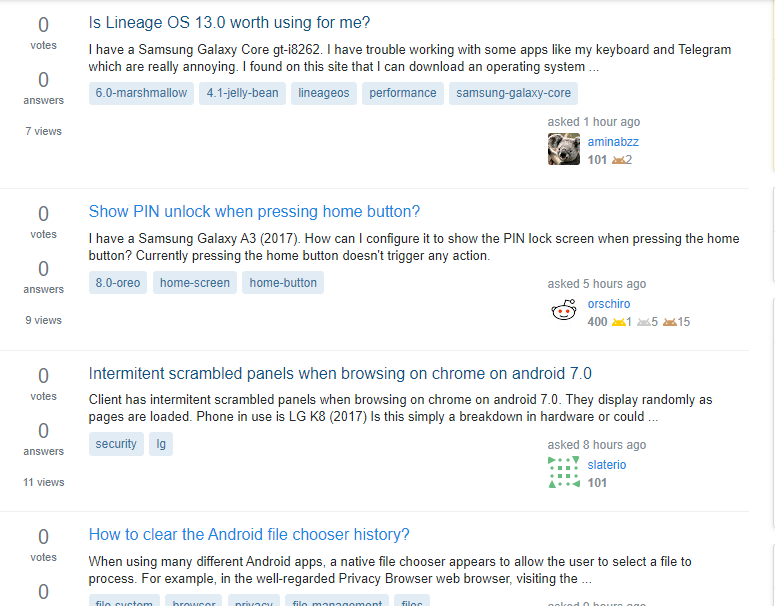 The timespan is about 8 hours, but no answers and votes; views are very low either.

But on its meta, there are good amounts of votes and answers.

Older than 8 hours ago you can see in the site, again little amounts of votes and answers.

I think, the Android SE is one of the hardest sites to earn rep. I believe it is no good. My answers in 2019/03 were created because I wanted to get to 200 on the site. The nearly complete lack of reaction (incl. lack of ups) were something what I nowhere on the SE experienced before that. I found also very hard to find answerable questions. Finally I gave up and got to 200 by edits.

The bad thing is that the site stabilized itself in a state, where its quality content is well-preserved, but on the price that it prevents its growth.

The good thing is that reaching a "critical mass", I do not close out an exponential growth in the future.

A major problem of Android, internet-wide, is the terrible amount of crap content. Anybody hunted for something in Android and also with an other technology, see this very characteristic difference. The overwhelming majority of Android content, what we can find by google searches, would be - well deservedly - quickly deleted on the Android SE.

This is an external property of the world in which we live, we can not change it, but we can adapt it. Be the change, suggested @beeshyams in a comment, and I think he is very right, so for you induvidually and also for us, collectively.

Having 15 rep, nothing avoids you to vote daily 40 posts up (please do not this on the price of decreasing the quality), and also the site can reach a critical mass, where it will be known for the googlers, that the probability of getting useful information in a google search result list, is high.

Having a well-going Android SE is our group interest. While we apply the rules for induvidual cases, we should not only see, which action matches best the site customs. We have a significant freedom, what exactly we do, and we should also consider, which possible action serves the best our group interest.

I think the community is not very healthy in this sense.

We should actively work on

My experiences are mostly positive, if I had a question, and mostly negative if I had an answer (I work a lot on the answer, and then no upvote, no comment, nothing).

A remark: There is a CM stat (based on data not available for mortals), that new users don't really bother on their scores. They want reactions. Surprisingly, not always answers - if they get comments, or even edits, it is nearly so good. And the worst effect to their re-visit is, also surprisingly, not if their posts are downvoted, but if it remains un-reacted. So, beside your vote, always give them something (edit, comment) which can be created only by a human. Focus your efforts to the users looking higher qualified.

I would add to that: people with 3-digit rep, want upvotes. Motivate them with your ups. Never giving ups is not better than giving always. Reward them easily, but never reward for nothing. Trivial math is that you inject the maximal information in the system, if your voting decisions between upvote, abstain and downvote are distributed in the 1:1:1 ratio. We don't like answer downs, an in general we want to attract people, so my suggestion is this:

Vote about half of the posts up, abstain in half the cases, and give downs only in very obvious cases.

There is another problem what I see. This is the Count of question creation, closure and deletion events by month: 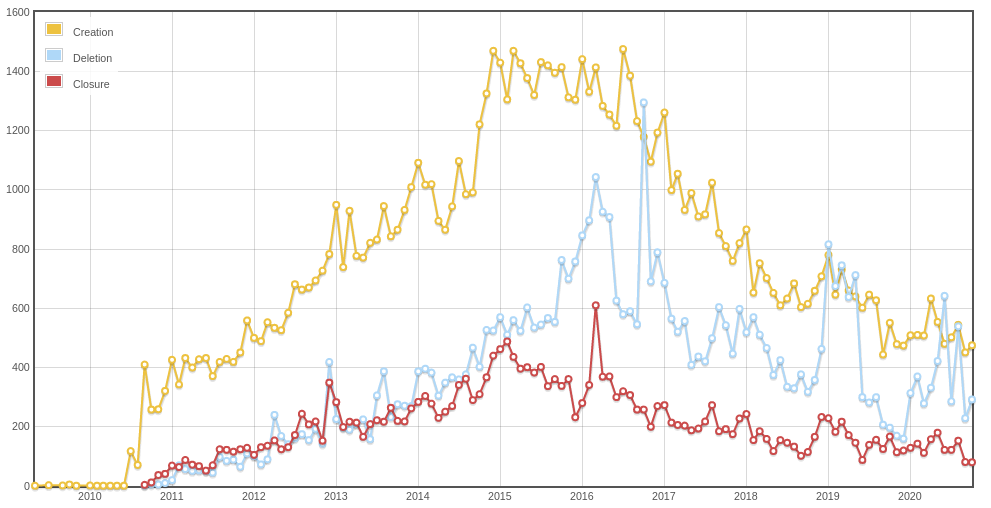 In my opinion, this stat clearly shows a site which is actively working on to prevent its own growth. I think you should dig into its reason, because this stat is simply deadly. Particularly the deletion spikes in 2016/10 and in early 2019 would deserve some investigation. Expelling users also prevents their future contributions to ever created, not only their posts, but also their votes.

Dear mods, voters, anybody caused these: if a post is bad, but salvageable, it is better to leave it in that state than deleting it. The deletion closes out the possibility of improving it ever.

Perhaps on the SE sites where active users don't vote enough, voting should be additionally encouraged beyond the existing "You seem to never vote" tiny popup. I don't know how it should look like, but maybe a logical appeal in addition to just stating that fact, like describing how small sites like this one would actually benefit from what would seem/feel like "disproportionate" voting compared to an average active SE/SO user's voting activity, and maybe show some comparative graphs. Because whatever we have right now is clearly not working well enough, and I think it wouldn't harm to try such an experiment. Just do something, is my idea.

Also consider creating unofficial subreddits or social network groups where a freeform discussion can be had in addition to links to this site for a strict Q&A type content. I'm sure both types of users can find something in other communities.

Not the answer you're looking for? Browse other questions tagged discussion answers votes .

25
You need the bourgeois blues
8
2018 Moderator Election Q&A - Questionnaire
6
Role of Moderators and others in increasing the strength and involvement of the backbone of the community
7
Why so few people to vote?
6
How can we spend some effort on improving our overall activity?

10
Do we need to rethink our site promotions and contests?
4
What makes a question “too localized?”
4
Should I direct my users to this site for support questions?
15
How shall we deal with outdated answers no longer valid?
0
Shall we hold a Community Wiki for all the “official” sites?
6
Role of Moderators and others in increasing the strength and involvement of the backbone of the community
3
Edit approval that changes the question - what should be done?