Sometimes when I'm editing posts which need preformatting (mainly code pre formats), If I click on the {} icon on editing tools tab:

I can't achieve the effect I want, instead the text appears to be just indented and not preformatted as a block. I have noticed this frequently with lengthy paragraphs which need to be formatted as code. Inline preformatting works fine with `` .

How can I create a preformatted block of text during editing? For example I was trying to edit this post: Tasker to programmatically uninstall apps.

This is what I got so far, it might not be the most efficient way to do it.

I suggest, instead of using whitespaces in every line, use <pre> and </pre> at the beginning of first line and end of last line.

If you're editing the text which falls between a list, simply add one whitespace before <pre> to align the whole preformatted text with the list. E.g.

This is what I got so far, it might not be the most efficient way to do it.

Oh my, I just found the solution: 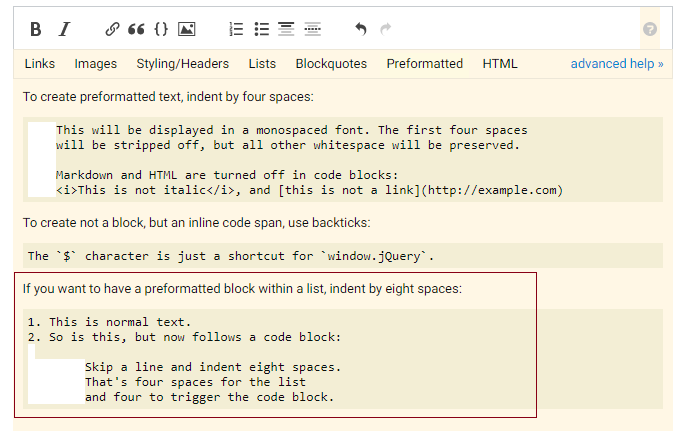 So the solution is indenting the target text by eight spaces

It seems my issue was that I was trying to create preformatted block within a list.

For related markdown this article also helps, Markdown help. They also state another way of doing this; Highlighting target text and pressing ctrl+K

Not the answer you're looking for? Browse other questions tagged discussion support .

6
Tips for editing other people's posts
2
Revise tag prompt text to encourage fewer device tags?
3
How to create tags without creating a question?
2
Text not being italicized
1
Time limit for editing chat
1
Should tag description be required when creating a tag?
6
Banned from editing question even if suggested edits are mostly approved
12
Editing posts for grammar